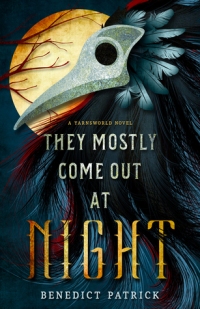 He locked himself away from the dark, but in the Magpie King’s forest nowhere is safe…

A fast-paced dark fairy tale with twists and turns, this is a book that I let sit on my to-read pile for far too long.

20 year old Lonan is an outcast in his home village of Smithstown. Accused of a crime against the village that he did not commit, Lonan is forced to live on the fringes of their small civilization, foraging for herbs for the town healer that allows him to shelter with her during the night.

This small village is secluded from the rest of the world and this quiet village’s biggest problem? Shadow creatures that come alive at night and wreak havoc wherever they hear the slightest noise from the village’s inhabitants. The only protection these villagers receive comes from the thought-to-be-mythical figure, the Magpie King.

Adahy is Prince of the Magpies and learning to one day take over his father’s role as protector of his people. After a vicious attack devastates their palace, Adahy finds himself taking on responsibilities that he feels vastly under prepared for.

This book has a serious fairy tale vibe that I absolutely adored. The fast pace of the storytelling and how easy it was to read pulled me in from the start. I really enjoyed Lonan as an MC because although he had been grievously wronged, he didn’t harbor this massive ill-will to the town in general. We come in to the story nearly 10 years after the event that changed the course of his life so he has had time to come to terms with his situation and it was kind of refreshing to have an MC that just dealt with his problems rather than harboring resentment for a decade.

Admittedly, Adahy’s story was initially a little less intriguing for me. Maybe this is because his story and character felt a little bit more familiar in the beginning. Young prince that is trying to step into his father’s shoes before he ready. By the end of the book though his story takes a massive turn with I loved and it made it all 100% worth it.

For every chapter with Lonan or Adahy, we also are treated to a smaller chapter that tells the stories from this world’s mythology and legends. These stories played a big part in the story and it is amazing to me how in so few pages, Benedict Patrick was able to create a world with such a deep history and keep the main story rolling simultaneously.

This was a perfect fall read for me and as of writing this I am already halfway through book 2, Where the Waters Turn Black, because I am addicted to Patrick’s storytelling.

5 thoughts on “They Mostly Come Out at Night (Yarnsworld #1)”