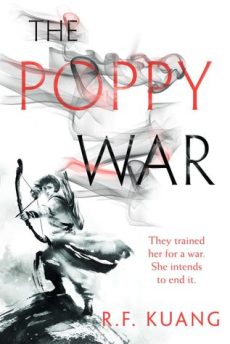 “Children ceased to be children when you put a sword in their hands. When you taught them to fight a war, then you armed them and put them on the front lines, they were not children anymore. They were soldiers.”

Like the blog and the podcast? Want to read this book? Help support us by using these links:

This book has been getting tons of accolades from so many reviewers. And it deserves all of them. In our podcast interview with the author, she describes it as Ender’s Game in fantasy China and honestly, I can’t come up with a better way to describe it.

Essentially, this story takes many of the events in early 20th century Chinese history, including the Nanking Massacre, and transplants them into a Song dynasty setting and then adds shamans into the mix for good measure. And it is fantastic.

Grimdark is not necessarily something that I read a lot of but this may be one of the most violent, gruesome books that I have ever read. Where I feel like many authors that have a lot of bloodshed in their books use it as a shock factor kind of thing, every act of violence propelled the characters and the story to its final destination. Nothing was extraneous and, seeing as much of it was based off of actual events, if it had been toned down it would have been a disservice to the victims of the Nanking Massacre.

There is one scene in particular that I knew exactly what was coming and when it was coming and I still cried when I got there because the events were so …honestly I just don’t have an adjective that truly describes it.

I think this was very much a plot driven book, at least until towards the end, but the character development and relationships were absolutely not neglected one bit. Rin is a complex character that I loved watching her evolve and make some tough and terrible decisions in the end. She is absolutely an anti-hero that makes some very dark choices that left me aghast at what she was willing to do.

There is one character that I started out hating their guts then later I came to kind of love them and their relationship to Rin….and then they died. So there is an entire roller coaster of emotions that this book took me through that I absolutely loved.

The Poppy War gets a lot of comparisons to The Name of the Wind but I feel like that comparison is superficial and really only applies to the first third or so of the book. Yeah there is an academy that the main character goes to and excels at but that is really the only thing they have in common. Kvothe and Rin are nothing alike and the story quickly takes a very different direction than The Kingkiller Chronicles.

Finally, I have to mention how great the representation is for this book. Not only is it a book based on Asian history, which is not discussed nearly enough in the West, but there are tons of Easter eggs in it for Chinese readers from references to books to various speech accents. Also, the book cover was designed by Taiwanese artist Jungshan and audiobook was narrated by Emily Woo Zeller so this book has tons of Asian representation!

Loved this book and everything about it.

2 thoughts on “Review: The Poppy War”