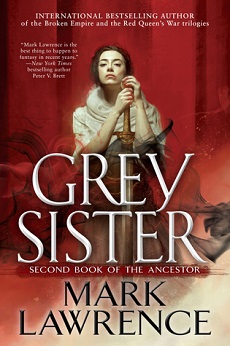 “Those novices are my friends and I would die for them. I would face a terror for them that I haven’t the courage to stand against on my own behalf.”

Make sure to check out our spoiler-free podcast discussion!

Thank you to Netgalley and the publisher for sending an ARC of this book!

In Mystic Class Nona Grey begins to learn the secrets of the universe. But so often even the deepest truths just make our choices harder.

Honestly, I don’t have much to say that I didn’t already say about Red Sister. I found this to be a very successful second book in a series as it builds on not just the plot but also the world. There are so many questions that I have about this world from who the Missing are to how exactly the ancestors came to be on this planet. While a lot of the world-building was done in the first book, this book had a few more hints about the Missing that just really makes me want to know more.

I also continue to be amazed for some reason at how well-characterized this book is. I feel like most of the time that I run into a book that has predominantly female cast, the characterizations fall into stereotypes and flat characters. Not so at all with the Book of the Ancestor. Every character has depth and never once feels like a stereotype.

Speaking of characters, Abbess Glass got a little bit more character exploration in this book and OMG I LOVE HER. The only way I can think to describe her honestly is Professor McGonagall from Harry Potter only a little younger (not young, but younger) and a kickass nun. She is currently my favorite character in this series.

While Red Sister took place primarily at the Convent of Sweet Mercy, Grey Sister shifts gears about halfway through the book and we get to explore more of the world. Maybe I was just a little bit too much in Nona’s head but I found the sudden change a little bit jarring. I got used to the story taking place in one location in the same way that I’m sure Nona came to be comfortable living out her life at the convent. So to very quickly change from one location to characters being on the move to possibly anywhere I found a bit disorienting at the time but I really enjoy this world and the idea of all life having to exist within the Corridor as ice closes in around them.

Finally, I appreciate so much that Mark Lawrence included a “Story So Far” section at the start of the book. It has only been a year in between releases but that is still enough time for readers to forget a lot of the details in a story. I did not reread Red Sister before starting Grey Sister and I still wish that I had taken the time to re-read the first book but having that Story So Far at the beginning was an enormous help to getting me back into the story and the characters.