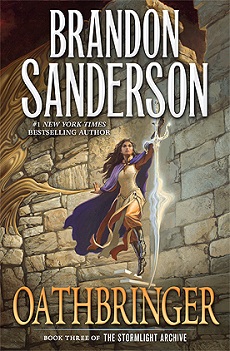 “I’m certain some will feel threatened by this record. Some few may feel liberated. Most will simply feel that it should not exist… I needed to write it anyway.”

Make sure to check out this week’s podcast discussion as well!

The Stormlight Archive is an ambitious project that Brandon Sanderson has undertaken. With seven more books to go, Sanderson again delivers in a major way with Oathbringer.

While still upholding to the same style and formula of the first two books in this series, Oathbringer brings in its own flavor as well. The plot expands from focusing on the war against the Parshendi to a fight against ancient forces for all of Roshar. Getting to see how the other countries’ cultures mixed with the Alethi, made for interesting plot points. Everyone is hesitant to trust Dalinar and the other Alethi highprinces due to the fact that the Alethi are known for being aggressive and taking over other countries. This ties in great with the plot line for our leader as well, Dalinar Kholin.

Dalinar is trying to move on from his past of being a bloodthirsty brute known as the Blackthorn. Seeing his struggle with trying to be diplomatic, while he also begins to get memories back of his warmongering past and what happened to his wife, was both exactly what was expected and an absolute joy to read (even tear jerking at times).

The focus put on the characters this time took a slower approach. We got more points of view from different characters and we got to see more in depth on some of the issues these characters are having. Kaladin has had trouble with depression in this series. Shallan doesn’t like who she is so combine this with her ability to become other people via Lightweaving, she starts to develop split personalities. As Dalinar recovers more of his past he falls into alcoholism. We get to see a deeper side to these characters and it is done very well.

That said, there were a ton more POVs in this book as compared to the first two. WoK and WoR mostly kept to Kaladin, Shallan, Adolin, and Dalinar as the main POV characters with other characters highlighted in the Interlude chapters. In Oathbringer, several characters from Bridge Four were also given POV chapters. Jasnah and Navani got a few, as well as King Taravangian and Szeth.

With all of these many POVs that we get, this book did feel significantly slower than the first two at times. The audio book was fifty-five hours long. For those that may not listen to audiobooks, that is a lot! By the end of the book, it did seem like there was a reason for all these characters getting POVs. The plot got a lot bigger and so the number of characters that were needed to show all the movements and changes made sense. There is still a sense that a few of them could have been kept to the Interludes or perhaps removed.

Oathbringer sets out to continue the story in some amazing character development and succeeds spectacularly. While this is will not be our favorite of this series, we will still be on the edge of your seats for the next one.

I have fallen so in love for these books and Oathbringer continued that love. The mental issues of these characters feels real and organic. Sanderson could have easily phoned it in and made them all moody for their own reasons. Instead he takes the time to plan out and thoroughly explore each character.

There is so much I want to gush about plot wise, but with out spoilers, the story expands to the whole continent and I loved our main characters interacting with the other countries.

I loved this book and I don’t want to wait two years for the next one.

I think this is my least favorite in the series so far but it was still a great read. I do hope that the trend of each book in this series being a little bit bigger than the last does not continue because while the first two felt like they deserved their size, this one felt just a tad inflated.

Nonetheless, it was by no stretch a disappointment and I look forward to rereading it to see what I did not pick up on the first time around.

One thought on “Oathbringer (The Stormlight Archive #3)”