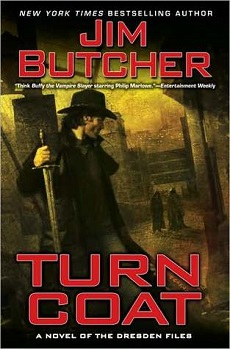 “Morgan was right: you can’t win them all.

But that doesn’t mean that you give up. Not ever.”

Harry is back in this eleventh installment of The Dresden Files. This book kind of showed a different side to the White Council, the police force of wizardkind, as Warden Morgan shows up on Harry’s doorstep begging for asylum as the Council hunts him down for the murder of a senior council member.

This book looked at the lengths that the White Council is willing to go to in order to keep the peace (well, as much as there is at this point). The politics in this series have kind of seemed a little bit strange at times but this book shifted gears a little and it made it all kind of click.

Other than that, there is not much to say that hasn’t been said before about the first ten books.

There was some inventiveness in spells in this book that stood out a little bit, among them what we are calling the silly string spell. It wasn’t a huge plot point or turning point in the book but it was impressive in how imaginative it was.

The ending seemed to drag a little bit is really the only bad thing that can be said.

This was another great book in the Harry Dresden series. I wish I had more to say except that this series just gets better by the book. Nothing super exciting or new in this one, but still a fun ride like the rest of the series. 15 books is a lot and there are more to come. Good things this series has been a thrill ride.

So taking a break from this series definitely did it some good. After nearly binge reading them, one at least every other week, I was getting really burnt out on them.

After so many books of  hearing about Harry’s lack of a love/sex life it seemed a little unjust that the one that was introduced in the last book ended already. Although I do look forward to the consequences of that relationship, especially in regards to the White Court vampires.

I did have a little bit of outrage with one of the ways the book ended…. Thomas?!?! How could you do that to Thomas?!?!