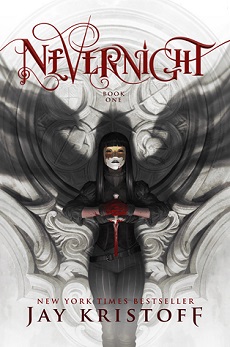 While this book utilized a lot of familiar plot devices and characterizations, the author’s ability to not shy away from gritty details carried the story home.

Mia Corvere’s father was hanged when she was 10 years old for treason and her mother and baby brother, her only remaining family, were left to rot in prison. Thought to be dead herself, she has dedicated her life to becoming a deadly assassin so that she may take revenge on those that ruined her family and her life. On the path to her revenge, she joins a religious order dedicated to death and the Mother of Night.

Mia’s power that makes her “special” is power over darkness. This seems like a kind of cliche power for a would-be assassin but it actually is a really interesting choice for this story as the effectiveness of her powers are mitigated by the fact that there are three suns orbiting this world making it so that darkness only envelopes the world once every few years rather than once every few hours. Being in the sunslight does weaken her power so while in other stories power over darkness and shadows would be something of an overpowered ability for an assassin-y character, it’s presence in this story is very well balanced.

On the surface this story seemed kind of like it has been done before and there is nothing really new to see here. And it is true that this story did not really explore anything new in terms of genre and didn’t really get deep into exploring any deeper themes. It touched a little on right v. wrong but not really in any meaningful way. The character ultimately made the morally correct choices even though the audience was promised at the start of the book that she becomes the most feared person in the history of ever, it really wasn’t seen here. It is the start to a series though and things were set up so that Mia’s character could certainly go in that direction and keep the promises made in the first few pages of this first book.

Still, this was a well put together story and well written enough that it is still highly enjoyable.

One of the things that kept the book entertaining was Kristoff’s wit and the footnotes on almost every page were a lot of fun to read. They added a lot of information to the building of this world that was not directly necessary to the story but helped to round out the universe that was created as well as provide some dark comic relief. Mia’s relationship with the stolen horse, Bastard (very aptly named) and her shadowy companion, Mister Kindly, also exemplified a razor sharp wit that was wonderful to read.

Having read my fair share of stories that lean heavily on the romance side of things, I have to say that this book contained some of the best sex scenes that I have read (barring those that “fade to black” before the real action gets started; I’m talking about the scenes that go from beginning to end without shying away from details).

The only other point that I would like to bring up is that this book had an interesting way to hook the reader in. The first scenes that we are introduced this story with alternates between Mia’s first sexual encounter and her first time to kill someone. It is written in such a way that the two individual scenes are almost parallel to each other.

At first I really liked this but the more that I think about this, while this was stylistically interesting, I can’t figure out what the point was. What was Jay Kristoff trying to say with this? Is it supposed to point out how similar killing someone for the first time and losing your virginity is? Because I have to say, I don’t really think the two can be compared like this.

This just accounts for the first dozen pages or so and did not impact my opinion on the rest of the book. I had a lot of fun reading this and am looking forward to devouring Kristoff’s other work.

I don’t have much to say that has not already been said. This was a extremely enjoyable, dark as hell, revenge story. But the author does not hold anything back and that feels good when your treated like an adult. The books, and movies, that kill characters off screen or aren’t real about death, can sometime make the death feel cheap. With Nevernight you know what you are getting into and that is a great thing.