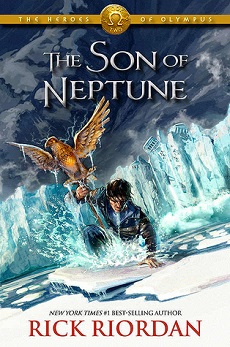 There’s a real pattern developing with plots in Riordan’s books and unfortunately he doesn’t ever seem to stray very far from this one blueprint. Unlikely heroes with secrets from the past go on an impossible quest with a super short time limit. They manage to hit a new mythological threat everywhere they stop, secrets come out, they conveniently complete the quest right in time with luck.

Riordan occasionally tries to insert a little commentary about our own world into his books. But unfortunately, Riordan doesn’t leave himself much room to be creative because of his well-rehearsed rigid plot structure.

We also need to complain about the romance between Hazel and Frank because there was no chemistry to be found. Their love story was the kind where a boy and a girl realize they’re both straight and happen to have an individual of the opposite gender nearby, so they think, “Hey, why not? Let’s get together.” There was no tension or strong emotion built up between them, Hazel and Frank just kind of ended up together without good reason. Very unimpressive.

The mythology in here is one of the few things that holds it together. Seeing the new Roman gods and monsters is interesting especially if you don’t know much about them.

I love this series and looking back now, I can see how stale this series can get. Same characters, new names. Same question, new monsters. I love the humor and some of the characters. These new ones in here, Frank and Hazel, are boring and have boring backstory. Unfortunately, they stay this way through the rest of the books. Frank has cool powers but that about it.

Overall, this is the weakest book in the series and I am looking forward to the next one.

The original Percy Jackson books were cool because of how they explored Greek mythology translated into modern times. The Heroes of Olympus attempts to add Roman mythology to the mix and it is not so cool. I guess this series could kind of be said to be exploring Roman mythology but all that we have gotten so far is “Romans and Greeks don’t like each other because stuff and things.”

This makes it kind of confusing to figure out how these gods fit into the world. They are different aspects of the Greek gods, sure. But why do the gods go between aspects as the obviously do since they have children as both? Why are both camps kept unaware of the others? I get that they don’t like each other but why does that have to mean they don’t even know about each other?

Oh right, because Riordan never mentioned them in the Percy Jackson books so he has to have a reason for why no one mentioned them. Gotcha.

Honestly, I am getting pretty bored of these books. I am given to understand that the formula that has been used in this book and the one before is not used quite as much in The Mark of Athena so I will give it a shot. Here’s hoping.