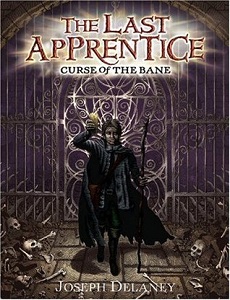 Curse of the Bane is the second installment in the Last Apprentice series. Though some of the scenes depicted are rather dark in atmosphere for a young adult book, this book is still loads of fun!

The writing is smart and the stories are very entertaining. The on-going relationship that young Tom Ward has with a young witch named Alice is especially easy to appreciate. Not everyone is evil through and through and it may be their circumstances that are the real problem. These characters have a sense of compassion that is in tension with the job they are tasked to do.

One thing this book touches on is the questionable choices that the Church has made. It is obvious that something regarding religion and the Church has strongly effected this author. There is nothing wrong with an organization being evil, but you have to remember that this is a kids book. Since this is aimed at younger audiences (no matter what your feelings are on the subject) this feels like a negative message to send to younger readers, at least if you talk about religion.

Overall this was an enjoyable book that has a consistent story. The fighting is fine, the characters are fine, everything just seems to be.. fine. The story is leading up to future things being bad, but the last two books have felt very much like filler. There hasn’t been much escalation and maybe that is due to there being 13 books in the series. I hope that it picks up more sooner rather than later.

I really don’t have much to say about this book. I enjoyed it alright but nothing really stood out to me.