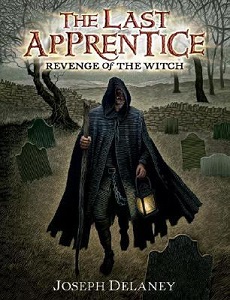 Author: Joseph Delaney
Category: YA, Dark Fantasy
Pages: 344
Publication Date: August 1st, 2006
The first installment of The Last Apprentice begins with our hero Tom heading away from home off to apprentice as a Spook. The job of a Spook is to defend the land against magical forces that threaten the normal way of life and can only be performed by the seventh son of a seventh son. Tom goes on a wild adventure with his teacher as they battle a evil witch with a vengeance.

This novel is surprising in that it can be pretty dark. Scary monsters and situations do keep you on the edge of your seat. For a book aimed at middle school age kids, it gets creepy with the ghouls and goblins and suggestion of eating babies.

The story overall was alright. It was fun exploring this world and makes you interested to want to see more!

There is not much to say in the way of Tom. He is your basic hero in training. He has no real character development and while that is not a terrible thing it kind of left the book with much to be desired.

This is a fun read that is magical and interesting. No real character development but is very enjoyable.

I was kind of surprised at how much I liked this book. I generally don’t have much luck with YA books because I tend to find the writing somewhat juvenile and the story pretty predictable. I think the level of dark that this story went to is what kind of got me into it. While the writing of the story is not reminiscent of the Grimm brothers, the story about a witch that eats infants made me think of Grimm’s fairy tales and I kind of appreciated that.

This is no Harry Potter or even Percy Jackson but it is certainly worth the read.

We saw the movie based off of this book, and although it was not a good movie, I really did like the story behind the crap. I was pleasantly not disappointed with this book. The story was fun, the world was interesting and the dark style was new for a book aimed at younger audiences. I am hoping that the rest of this series holds up and is just as exciting.