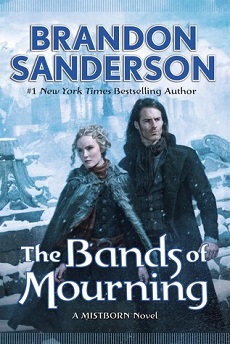 WARNING! At the end of this review, there will be a small section containing spoilers! It will be at the very end of the review so it can be left unread and nothing will be missed from the main review. Please do not read if you do not wish to read spoilers. There will be another warning before the spoiler is shown.

Now on to your regularly scheduled review. :)

The Bands of Mourning is the newest installment in the Mistborn Series Era 2 from Brandon Sanderson.

After the events of Shadows of Self, Waxillium Ladrian finds himself on a another adventure. This one, thankfully, has him leaving the city of Elendel to find the truth behind the very power the Lord Ruler himself held, The Bands of Mourning.

The last two books of the series both took place at and not too far from Elendel. This one leaves the comfort of the city and became more of a journey into the rest of the Basin. Getting to explore and see more of this world was refreshing. Not being in one city the whole time opened more options and new characters were revealed that the series really needed.

While there has been some character development between the characters Wax and Marasi the biggest and best change in this book was Steris, Marasi’s half sister and Wax’s fiance. Steris came across as very stern and uncomfortably straightforward when we met her in The Alloy of Law. She has really came out of her shell now and made you look at her in a new light. She likes her list and to be prepared because it is the way she deals with the craziness of the world. While this puts other people off, this is something that Wax is coming to understand about her. The progress their relationship made and what it has become is pretty beautiful.

Like all Sanderson books, the action is engaging and fun. With the Allomancy and Feruchemy, the battles get technical and fun to imagine as people fly around the rooms. The addition of technology, and this goes for all these books in Era 2, really adds to the excitement and evolution of combat.

There is also some exploration of how science, i.e. gravity, relates to Allomancy and Feruchemy. There is a short discussion on when Wax uses his Feruchemy to make himself lighter is he changing his mass or is he changing gravity’s effect on him? No other fantasy book we have encountered has had this discussion or tried out the mixing of magic and science like this. So while it was not explored in depth here, it still promises that more will come. Especially knowing that the next Era of Mistborn books is supposed to take place at some point in the 20th century.

The plot was fairly predictable and there were surprises revealed but nothing felt groundbreaking until the very end of the book, even then it was just hints. Literally the last paragraph had the only real shock and even then it was slightly ambiguous.

I enjoyed this book much better than the last one. Wax and Marasi haven’t seemed to devolope all that much and I don’t know how much they really can. Wax needs to wake up and stop blaming the world and Marasi needs to stop comparing herself to Wax. Both of these points are hit in this book but both have been hit earlier in the last books. Steris is awesome and I love her! Besides Wayne she is my new favorite character. This series has been good but it has had a lot to live up to with the first trilogy (which is my favorite book series of all time). If you are a fan of the series you will enjoy the same old good time, with no really big new twist. If you are new to this series and think about picking it up, then please go back to the original book, Mistborn: The Final Empire and read from there.

My favorite parts of this book were definitely the parts with Steris. She has gone from annoying sister that you hoped Wax doesn’t actually have to marry to an incredibly complex character whose difficulties associating with other people are easily relatable.

Other than though, I seem to have trouble getting really excited for the 2 most recent Mistborn books. It’s enjoyable and has many positive qualities but for some reason it is just failing to WOW me.

Of course, I also thought that The Final Empire and The Well of Ascension were kind of “meh” until after I read Hero of Ages. The conclusion to the first trilogy tied together so many things from the whole series so well that it retroactively made me fall in love with them.

Here’s to hoping the conclusion to Mistborn: Era 2 is the same way!

Also, the spoiler section is my opinion. Greg does not share this opinion with me but I needed to rant about it a little.

Below this point are potential spoilers for any books in the Mistborn series! If you do not wish for major plot points to be revealed, please DO NOT CONTINUE BEYOND THIS POINT.

Wax dying and being brought back to life was incredibly frustrating for me, and not only because it was very predictable.

It seems like every TV show that I watch or book that read now has had at least one character that died and was brought back to life. The problem with doing that is that emotional stake your reader/viewer has in that character is just gone. I don’t have to be afraid that this character or that character is going die because I now know that something exists within this universe to bring them back and likely will. It seems like every author/screenwriter is pulling this lately and it just feels so cheap.

And I know that Sanderson is a brilliant writer so I am extra frustrated with it being in this book because I know that he is better than that.